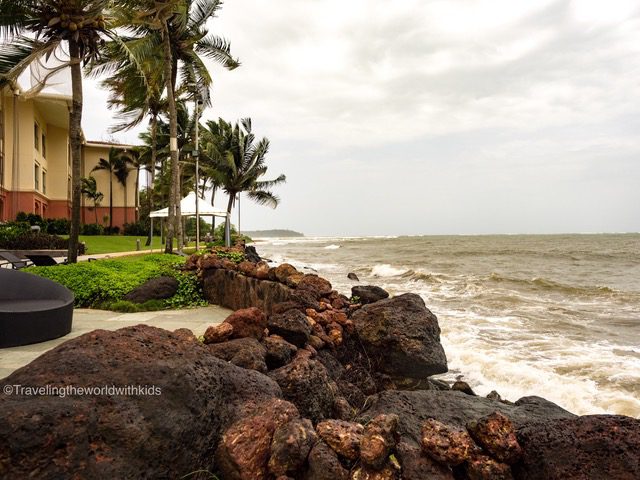 We recently visited Goa, INDIA, where in fact, we really had no expectations. With the understanding that Goa was once a Portuguese province, we anticipated some remaining cultural Portuguese influence, perhaps some beautiful Indo-Portuguese style architecture and possibly some Portuguese street food to try if we were a little brave. We had heard that there were some lovely beaches, churches and temples to see, and we believed that the hospitality was really good.

Our visit was in the middle of monsoon season.. which actually was quite nice.. there is nothing better than having a reason to relax, being sporadic monsoon season afternoon showers with occasional blasts of beautiful sunshine. If you can fit a swim in there somewhere, the day will be well enjoyed for sure.

So where exactly is Goa?

Goa is a state of India, located in India’s Western region reaching the Arabian Sea. Most of Goa is part of the coastal county of Konkan, where the coastline reaches 101km’s (63mi) in length.

We found out that Goa was very popular amongst not only international tourists but a lot of domestic tourists – Indian locals (from other provinces). Its main attraction is its beachside towns and Resort Hotels, plus the true mix of world heritage architecture.

What’s to see in Goa with the kids?

Goa is well known for its Churches and temples, Museums, spice plantations and Beaches. Tourism plays a critical role in Goa, as it is considered the beachside town to visit for not only local Indians but also international travelers. Speak with your hotel and arrange the sights plus remember to ask them to suggest the most suitable beach for you, as there are numerous beaches and it all depends on what you typically like to do at the beach.

Our top 5 sights to see in Goa without a doubt are the following:

Things to see in Goa include:

The Basilica holds the remains of St Francis Xavier, regarded by many Catholics as the patron saint of Goa.

Churches and convents of Old Goa

The monuments of Goa held great influence in the 16th-18th centuries on the development of architectures et al. One of the most beautiful churches is the Our Lady of the Immaculate Conception Church. First built in 1541 as a chapel by the Portuguese, it was replaced by a larger church. The facade is white and is in the style of Baroque architecture.

The Se Cathedral (aka. Se Catedram de Santa Catarina) is the cathedral of the Latin Rite Roman Catholic Archdiocese of Goa. Located in Old Goa, it is a very grand and beautiful Church that definitely should be on the places you should visit.

There are so many temples in Goa to see. We visited a very significant temple, named Shri Manguesh Temple. (pictured below). It was in nearby the Tropical Spice Plantation, so it will easy to reach and also lovely to visit. You will also pass by a market with loads of traditional and novel souvenirs, to reach this temple. So you can do a spot of market shopping at the same time.

There are many forts in Goa, namely Aguada, Chapora etc. Fort Aguada and its lighthouse is a well-preserved 17th Century Portuguese Fort still standing on Sinquerim Beach (overlooking the Arabian Sea). It is about 40 minutes (by car) from Panjim, Goa.

Fort Chapora is located in Bardez (almost 1 hour by car from Panjim).
This fort was built in 1717 (replacing previous fort fortifications).

Fort St. James Banastarium (aka. Benastari Castle) is located on the banks of Cumbarjua Canal (on the eastern tip of Old Goa). This fort was conquered by the Viceroy of Portuguese, India Alfonso de Albuquerque (in 1515).

Possibly one of the most enjoyable things we did in Goa was visit the Spice Plantation in Ponda, Goa. Expect to be treated to a fascinating hands-on tour of the plantation where you will see, smell and taste a huge range of spices, all natural and local to the region. From coffee beans to vanilla pods
on trees, you will be treated to a very relaxing tour through the plantation finishing with a delicious meal of traditional Indian curries and delights. Don’t forget to try the pure mango juice!… it’s totally delicious!

Goa is renowned for its beautiful beaches. Amongst a few of the beaches to visit include Agonda and Baga Beaches. Agonda Beach is
known for being serene and clean and less crowded than other beaches with loads more privacy. It is, however, over 1 hour drive from Panjim. Baga Beach is a very popular tourist spot, it is known for its nightlife and amazing seafood served at its beach shacks and restaurants. It is about 1/2 hour drive from Panjim.

There are a few ways to see Goa which are all reasonably priced, efficient and safe.

There are many Taxi’s in Goa. Apart from hiring a private (tour) car, it is possibly the next best way to get around. It is not expensive, and distances in Goa are not so expansive. Expect a trip – let’s of say 10km’s – to cost you at least 250rupees (approx. $5 US)

We tended to travel around in a private car arranged by the hotel where the cost worked out to be approximately 2,000 Rupees for a 3 hours+ time period. It was worth every Rupee, as we were able to plan our things to do and see within this time without researching how to reach the places. The driver also explained at every point what the tariffs and entry costs were, as well as what to expect with cultural advice.

HINT: You can arrange a private car with your hotel. Have at least 5 activities pre-considered and arrange the tour that way. A trip in a taxi from ‘Panjim’ central to the Airport will cost you approximately 730Rupees. This can differ slightly with additional traffic.

Bits and Pieces about Goa, India

The official language in Goa is Konkani (with 61% of Goan’s speaking it), other languages include Marathi, Hindi, Kannada, and Urdu. You will find that most if not all tour guides and tourist places speak English quite well. Within the more well-known and larger hotels, you will not find any problems with staff speaking English.

There are yummy Indian curries, parathas, papadums. Spices, spices, spices! We ate curries and parathas for breakfast, lunch and dinner and the food is out of this world. A very traditional dish is the Goan Fish Curry. Fish is one of the most common ingredients used in traditional Goan curries. Prawn curry is also a favorite. The area is located in a tropical climate means the spices and flavours are typically intense.

At the Marriott Goa Resort, they would treat us to a new style or flavor of curry, and a new delicacy local to the region. It gave us a fantastic first-hand experience of what the region celebrated and enjoyed in terms of their local ingredients and cuisines. But don’t worry, if you’ve got picky eaters on your hands that aren’t too taken by all the spicy food, most hotels cater well to Western tastes!

Goa has a topical monsoon climate and being in the tropical zone and near the Arabian Sea, has a hot and humid climate for most of the year. The hottest month in Goa is May, with an average temperature of 30°C and the coldest is January at 20-25°C. Most of the annual rainfall is seen through the monsoons which lasts until September.

Goa is at UTC +5. To convert this relevant to your home country, refer to Time and Date’s World Map.

Emergency Numbers when in Goa..

Most International flights will have you reach Goa via Mumbai. But there are of course many flights into Goa itself, as well as through other major cities throughout India. The dominant Airlines that fly to India direct from Dubai include Emirates and Air India.

Do not forget to…

Check with the Indian Consulate in your nearest City should you require a tourist visa but it’s not required for British. For many countries, however, one is required. Don’t leave this too late. The Consulate of India is located at 8th Street, Al Hamriya, Diplomatic Enclave, Dubai. Call them on 04 397 1333.

There are so many places to stay in and around Goa. There are an abundance of hotels spanning from Morgim Beach (Northern Goa-nearby Chapora Fort) down to Sinquerium Beach (near Aguada Fort). Another good location to consider is the Panjim Area. The stretch of Miramar Beach makes for a nice outlook from your hotel. We chose to stay at the Marriott Resort & Spa – located in (Western) Panjim. Not being familiar with the location, we decided to run with a well-known brand name Hotel / Resort. We highly recommend it.

The Airport of Goa (Goa International Airport) is located on the Island of Vasco de Gama. Take this into consideration when you are researching your mode of transport to and your chosen hotel.

Having lived in the Middle East for almost 10 years, Annemieke is a mother of two and the creator of the travel website “Traveling the World with Kids”. Her passions include writing, reading and travelling with her family.

British Mums Guide To The Maldives

Skiing On a Budget in Georgia

Off The Beaten Track To Sri Lanka

Would you like to write for British Mums? If so, we would love to hear from you. Please send us an email to blog@britishmums.com 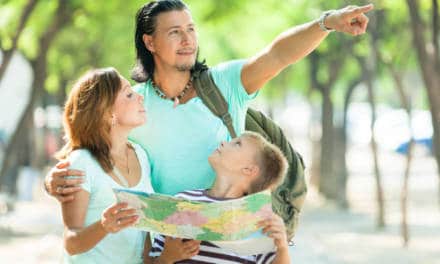 Best Cities for a Short Break in Europe 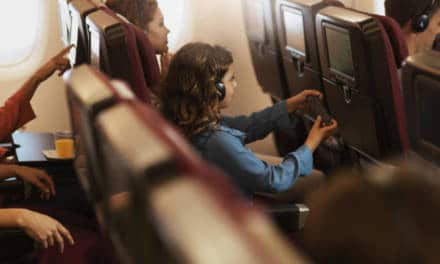 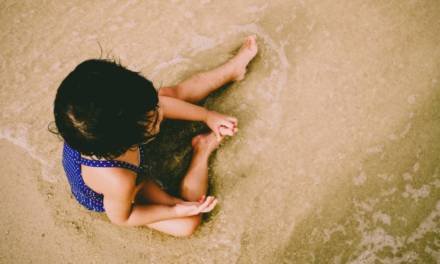 An Expat Guide To Traveling With Kids 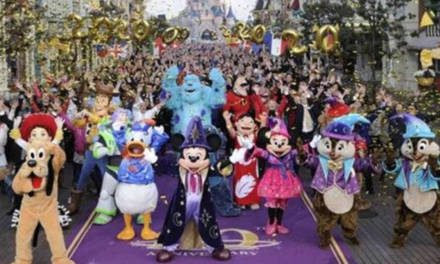 Everything you need to know about Disneyland Paris

Save 40% on health check-ups with Mediclinic, City Hospital until 31st March 2020